This is a delicious, and relatively simple, one-pan meal by Tyler Florence from his book, Tyler’s Ultimate: Brilliant Simple Food to Make Any Time.

Arrange the shrimp in a single layer on half of a large baking sheet and put the bacon pieces on the other half.

Season the shrimp with salt and pepper and drizzle with some olive oil. Scatter the sage leaves.

At the same time, on a second baking sheet, drizzle the tomatoes with olive oil, sprinkle with salt and pepper, and toss.

Scrape the tomatoes, shrimp, bacon and any juices into a large bowl.

Add the beans, the vinegar, and some olive oil.

Toss with the greens. 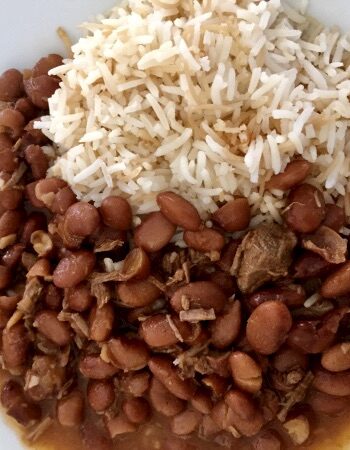